"That of breathing is a matter that I am engaged in since more than two years and that has begun with an exhibition at CASABLANCA, in Bologna. Then it has been the focus of other exhibitions: at PLATFORM, the project-space connected to the MNAC in Bucharest, in Fessure at the MIDEC in Laveno, more recently in Dialogos Part Two at the CACT-MACT in Bellinzona and lastly during Roaming. Riposizionamenti at the Ex Szeemann Archive in Maggia. In the meantime, by breathing, series of other works have arisen. I do not know exactly why and where my interest for breathing originated, but it is always the same, we always ‘do not know exactly why’. Certainly it is an additional demonstration of my need to turn my attention to what is infinitely small and to what is evanescent, being aware that the essence is right there. It is no coincidence that starting from the Greek pneuma and coming until the Christian spirit, breathing is a focus tending to identify with life itself. And it is not by chance that in the oriental culture, for example according to the Sutra Anapanasati, within a view that does not  distinguish mind from body, the awareness of body passes through the action of breathing itself, through the act of breathing in and breathing out."

From: Respiri, RISS(E), VARESE, 2014,
with Patrizia Giambi and a contribution by Alessandro Castiglioni 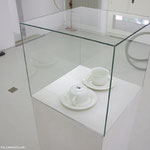